Recently, Russia mobilized nearly 1 lakh troops on its border with Ukraine. Russia justified troop mobilization on the logic of eastward expansion of NATO followed by the threat to the national interests of Russia. Russia is demanding written security assurance of the west.

In today’s geopolitics, for the US-led order, Russia is still dangerous not lesser than China in terms of challenging the Pax-Americana amid the Ukraine crisis. It is so because Russia’s confrontation with the west is purely ideological i.e., Communism against liberalism. Kishore Mahbubani, former president of UNSC says that the rise of China is not ideological but cultural. For the US, ideology is the core threat and culture is the peripheral threat since the US way of life has still been a ‘common sense’ in today’s world.

Spykman stated that Eurasia’s rimland, the coastal areas, is the key to controlling the World Island. Thus, Russia’s rimland becomes important in maintaining freedom. Russia alleged that North Atlantic Treaty Organization (NATO) expansion to the east threatens its interests. Russia demands a ban on further expansion of NATO to include Ukraine, Georgia, and other countries which are in proximity to Russia on its western front.

Three Baltic countries (Estonia, Latvia, and Lithuania) shared a border with Russia and was a member of the Warsaw camp. Now, these three Baltic countries are part of the NATO camp. After the disintegration of the USSR, many countries became independent in the western front of Russia. The US is trying to make them subscribe to the NATO camp. Thus, Russian president, Mr. Putin asked NATO to roll back military deployment to the 1990s level. Russia also asked NATO to ban the deployment of intermediate-range missiles in areas that would allow NATO to reach Russia.

Response and reactions of the US

So far, the US has not given such written assurance. Washington has responded to Kremlin but it is not yet in the public domain. But political Jugalbandi of Joe Biden and Anthony Blinken suggests that the US is trying to handle diplomatically through talks. However, it is clear that the US has rejected any change in the “open door policy” of NATO. It indicates that the door for NATO membership will remain open to other European countries which are ready and willing to subscribe to NATO.

On top of it, the US claims that it would continue to offer training and weapons to Ukraine. Along with the hard power mentality, the US parallelly opens space for deliberations. The US is ready to discuss missile deployment in Eastern Europe and a mutual reduction in military exercises. Apart from this, the US under the leadership of Biden also shows reluctance to the direct military confrontations. Thus, the US has ruled out the option of sending troops to Ukraine. But Washington would again try to test the capability of economic sanctions against the Kremlin.

Implications of the current escalations

The US has invited two front challenges to the US hegemon. The rise of China as a cultural challenge validates the possibilities of the ‘clash of civilization‘ thesis proposed by Samuel P Huntington. In 2013, China has surpassed the US economic might in terms of GDP by PPP. It has displaced the US at second position. On top of it, escalations in Ukraine coins the possibility for a new cold war. Thus, the US has invited both cultural challenges as well as an ideological challenge to the US at the same time.

Another implication could be the annexation of Ukraine. However, Russia promises that it would not attack Ukraine, but two theories are coming before us. One theory suggests that Russia would attack Ukraine from three sides – first, Russia has a direct border with Ukraine’s western front. Second, the Southern border of Ukraine is with Crimea and the south-western border is with Moldova. The third front could be Donbas, eastern Ukraine since Russia is constantly backing separatist forces there. 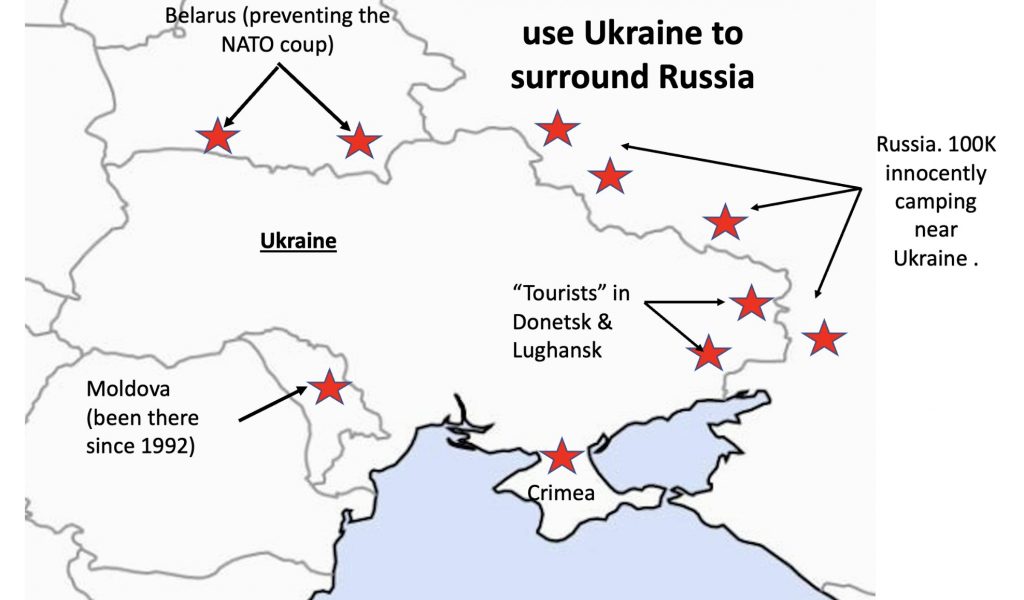 Another theory suggests that Russia would assist separatist forces militarily and capture the Donbas region. It would push the frontline into Ukraine without criticism from the international community. Apart from annexation, the most likely implication would be to declare diplomatic victory through brinksmanship. But it would be possible only when the US gives assurance to Russia. Consequently, Russia would get the upper hand in Ukraine through the revival of the Minsk process, an agreement that sought to end the war in the Donbas region of Ukraine.

Why the US is still interested in Russia’s backyard?

History often repeats itself. Cold war experiences suggest the US about the potential of ideological threat. Ideological confrontation has the capability to reduce space to escape and continue for a long time. The Basic rule of the hegemon power is to keep the backyard intact and not let any other countries in the world to keep the backyard intact. Ideology play important role in this. The US is blessed with geographical advantages. It is in between the Pacific and Atlantic oceans.

The US doesn’t have a bitter neighborhood as compared to India, Russia, and China. When the US felt that there is possible disagreements in its neighborhood, the US deconstructed NAFTA and reconstructed it as United States-Mexico-Canada Agreement (USMCA). It addressed conflicts related automotive and dairy sectors. Parallelly, the US doesn’t want to let the backyard of China and Russia stable. Thus, the US through Island Chain, the US proximity with India, and ASEAN try to contain China. The US through NATO tries to contain Russia on its western border.

Intelligence reports had indicated Russia’s intention to order an invasion of Ukraine. Mr. Putin tested Biden’s capability in the summit in Geneva and then started its actions. Russia has already annexed Crimea through a referendum which was part of Ukraine. Vladimir Putin has also backed Belarus President over the refugee crisis on the Polish border of the EU. It indicates that Russia is increasing the sphere of influence in the eastern flank of NATO that was reduced by the Sinatra doctrine of Mr. Gorbachev. It validates the perception that the US has become weak.

In geopolitics, perception matters more than posture. If the US agrees with Russia’s terms, it would confirm the weakness of the US. A similar kind of demand has been made by Iran. Iran wants the removal of sanctions first with the promise of not violating terms in the future by any US president. It is all about the perception that who is going to become ‘chicken-hearted’ in the game theory.

However, there is a need to revive Intermediate-Range Nuclear Force Treaty (INF Treaty) which was suspended in 2019. Similar to the recent extension of the START Treaty, the US and Russia should agree to the renewal of the INF treaty as well as the open sky treaty. It would certainly contain the chances of escalations in near future.

Be the first to review “Russia-Ukraine conflict: Geopolitical turmoil of the Black Sea” Cancel reply