Recent assembly elections 2022 were conducted in five different states – Uttar Pradesh, Uttarakhand, Manipur, Goa, and Punjab. In four out of five states, BJP retains its power by defeating anti-incumbency. While a power shift is witnessed in the case of Punjab where Congress lost power and the Aam Aadmi Party (AAP) came to the power. Thus, Punjab shifts away from traditional parties and are ready to taste new party. However, BJP seats in UP have decreased but increased substantially in Manipur.

Apart from ups and downs in voters turnout and seats, some questions are still unanswerable – How does India with multi-party democracy, faces bipolarity in almost all elections? What roles does narrative play in influencing voters? How and why the state of congress is diminishing brick by brick? What kind of magic is played by voters in every election? Can we call UP assembly election 2022 in particular as a semifinal before general election 2024? – We will try to ponder upon these points.

Bipolarity and narrative in the assembly elections

Even though India is a multi-party democracy, the elections across the states have been bipolar in nature. For example, it was clear from the beginning that there was a bipolar fight between Bhartiya Janta Party (BJP) and Samajwadi Party (SP) in Uttar Pradesh. The role of the Bahujan Samajwadi Party (BSP) was seen dormant in spite of the fact that the chief of BSP, Mayawati was CM of UP for the four times. Similar trends were seen in Punjab (Between AAP and Congress), Goa (Between BJP and Congress), Uttrakhand (Between BJP and congress) except Manipur.

In the context of UP, BJP has been successful in convincing its narratives to the ground – “Mafiawaad”, “Gundagardi by laal topiwalahs”, “appeasement of one community” and “Bulldozer Chalega”. Apart from attacking the main opponent, BJP was successful in delivering a blend of welfarist measures, security, zero tolerance on law and order situation along with a hybridized form of Nationalism and Hindutva. I think for BJP, development and security issues helped in defending against anti-incumbency instead of Hindutva and Ram Temple. It is because if Temple benefitted, then BJP’s seats would have not reduced from 312 in 2017 to 255 in 2022.

See also  “Thanks for 90 votes”- Four words of elegy

Evidence of successful delivery could be witnessed in media coverage where people used to give the same logic as set by the BJP office against Samajwadi Party (SP). Parallelly, SP has been failed in both – defending the narrative as well as building a narrative on high inflation, mismanagement of COVID-19 pandemic, and unemployment. Statistics published in ‘The Hindu‘ shows that voters were disillusioned and SP failed in consolidating anti-incumbency sentiments. Similarly, AAP in Punjab was successful in convincing – the “Delhi Model” to the people of Punjab.

Landslide victory and decline of congress

Aam Aadmi Party (AAP) in Punjab won 92 out of 117 seats (Nearly 78.6% of total seats) with a vote percentage of 42.01%. It is a big victory for AAP in its political journey. Similarly, BJP in Manipur won 32 seats out of 60 seats with 37.83% votes while all other parties are under single digit. In both these states, seats of the Indian National Congress (INC) have reduced significantly. In Punjab, Congress seats have been reduced to merely 18 seats in 2017 from 77 seats in 2022. On the same line, congress seats in Manipur have been reduced from 27 seats in 2017 to 6 seats in 2022.

The decline of Congress in India is a matter of grave concern because of two reasons – First: Even though India is a multi-party democracy, elections have been either completely bipolar or bipolar through coalition. It has been given birth to a single-party democracy which can’t be the case of Caesar’s wife above suspicion. Second: Since Congress has been a party of diverse communities, and is almost free from identity politics may give rise to radical political parties. Witnessing small footprints of AIMIM, and the Social Democratic Party of India (political outlet of radical organization, PFI) are merely hints. 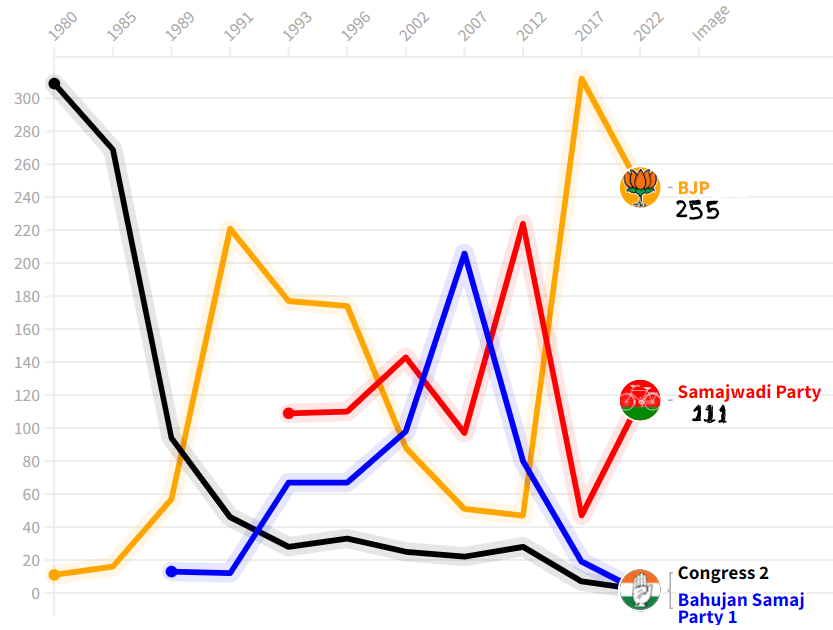 This graph shows the rise and fall of four major parties in UP from 1980 till today. [Graph source: Indian Express]

Reducing congress to merely 2 seats out of 403 seats is asking for the reasons behind the congress debacle. Conflict for INC leadership at the provincial level has become public. The tussle for CM candidate in Punjab between Charanjit Singh Channi and Navjot Singh Sidhu was seen. Similarly, a series of disputes between Ashok Gehlot and Sachin Pilot are seen in Rajasthan. In fact, disputes between Jyoti Raj Sindhia and Kamal Nath in MP ended with Sindhia joining BJP. Such disputes trace their origin in poor INC leadership in New Delhi. Dynasty politics, the role of psychopathy, and lack of coherent stand on national and local issues reduced INC to the weakest point.

The unpredictability of voter’s behavior

However, it was not limited to Punjab, in Uttarakhand, Pushkar Singh Dhami, the incumbent CM and the CM face for BJP has lost his seat from Khatima. Similarly, former CM of Uttrakhand and a senior leader of INC, Harish Rawat lost from Lal Kuan seat by more than 10,000 votes. On the same line, the deputy CM of BJP, Keshav Prasad Maurya has lost his seat from the Sirathu constituency. Incumbent deputy CM of Goa Manohar Ajgaonkar from BJP also faced a debacle.

With the end of assembly elections 2022, a new debate has started whether the UP election particularly could be considered as a semifinal before the final in 2024 or not. Those who don’t buy the ‘argument of semifinal’ accuse BJP of creating psychological impacts in voters’ minds for 2024. This argument can be validated with Amit Shah’s statement – “If you want to make Modi Prime Minister again in 2024, make Yogi Adityanath the Chief Minister again in 2022”. It also validates the fact that BJP starts the next campaigning from the next day of counting in a state.

But the other side of the coin says that BJP decline was manifested by analysts since the BJP debacle in the West Bengal Assembly election 2021. Due to the debacle in West Bengal which consists of 42 seats for the Lok Sabha, the UP assembly election 2022 was considered as the straw that would probably break the camel’s back since UP alone carries 80 seats for the Lok Sabha. It could have given a green flag to regional parties to create a third front. Nonetheless, these victories would certainly give a big relief to BJP against the negative externalities – Inflation, Unemployment, and mismanagement of the COVID-19 pandemic.

Thus, people’s mandates enjoy supremacy in democracy. It forces the leaders of all parties either the winner party or the defeated party to accept it happily, at least in public. In all five states, people have celebrated this festival of democracy with great pomp and show. The enthusiasm of people in a democracy can be understood from the fact that some people brought old people on “Khaat” to the booth for voting. The biggest congratulations should be given to the election commission of India that had organized such a big event with full responsibility and transparency.