India unveiled ‘National Electric Mobility Mission Plan (NEMMP) 2020’ in 2013 to address the issues of National energy security, vehicular pollution and growth of domestic manufacturing capabilities. Reiterating its commitment to the Paris Agreement, the Government of India has plans to make a major shift to electric vehicles by 2030. E-commerce companies, Indian car manufacturers like Reva Electric Car Company (RECC), and Indian app-based transportation network companies like Ola are working on making electric cars more common over the next two decades. The automotive industry in India is one of the largest in the world.

The automobile industry accounts for 7.1 per cent of the country’s gross domestic product (GDP). The Two Wheelers segment, with 81 per cent market share, is the leader of the Indian Automobile market, owing to a growing middle class and a young population. Moreover, the growing interest of companies in exploring the rural markets further aided the growth of the sector. The overall Passenger Vehicle (PV) segment has 13 per cent market share. This is the basic reason why almost all the companies are willing to pursue the words of Indian government. Indian Market has been centre of attraction for the Automotive industries.

Many companies have come up with the concept design of electric vehicle. The Auto Expo 2018 has been a show filled with electric cars all over, major companies came up with production-ready models and concepts of electric cars. Most of these exhibits will either be launched in India or provide a platform for India-specific variants that will soon make a beeline for shipping in India. French auto major Renault showcased its electric concept cars TREZOR and ZOE e-Sport at the Auto Expo 2018 here and said it is awaiting a clear policy and roadmap on infrastructure for electric vehicles to take a long-term strategic decision. These two Electric vehicles were centre of attraction in the respective Hall.

See also  Lateral entry in civil services: A dilemma between specialist Vs generalist

The electric high-performance two-seater GT concept will demonstrate the company’s future design language. It was first unveiled at the 2016 Paris Motor Show and has been displayed at several such events since. 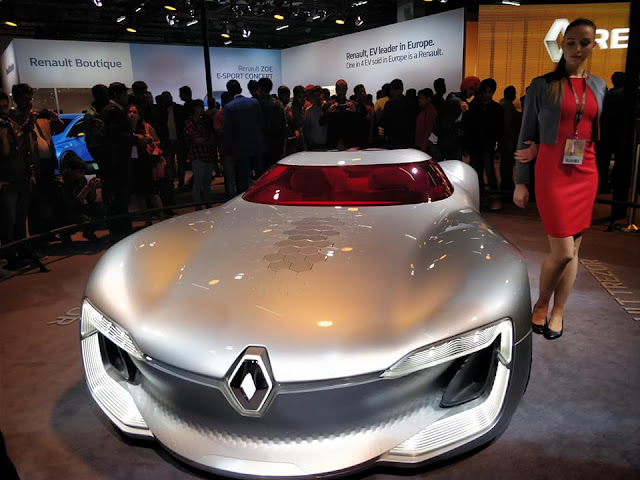 The Trezor is 4,700mm long, but is just 1,080mm tall and has a wheelbase of 2,776mm with a short rear overhang. The concept rides on 21-inch wheels in front and 22 inches at the rear and gets carbon-fiber scoops to control brake temperature. The Trezor chassis has a central carbon-fibre spine that connects to steel frames and is equipped with an all-round independent suspension. It is powered by a Formula-E-sourced 350hp electric motor that sends power to the rear wheels. The motor derives its power from two large batteries – one at the front and one at the rear  and the car tips the scales at 1,600kg. It takes less than four seconds to clock 100kph.
The Trezor also gets a selectable autonomous mode, and on the inside, the entire instrumentation is screen-based with two large displays on the dashboard and three small displays on the rectangular steering wheel. The bucket seats are wrapped in leather and it gets a wooden-framed luggage compartment good for two suitcases. The highlight of the concept, however, is that instead of traditional doors, it gets a single-frame canopy that lifts vertically. 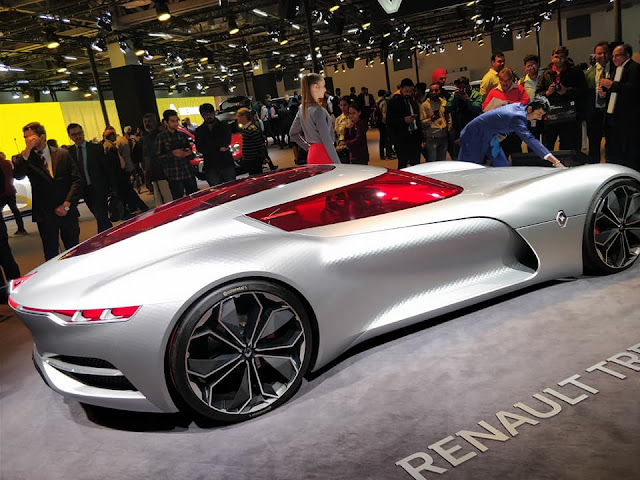 Renault has teased the new Trezor concept ahead of its official unveiling at the Paris motor show. Much in the way that the DeZir concept heralded the carmaker’s current look in 2010, the new concept will introduce a design direction for future production models. Renault says the name of the car “conjures up the image of a prized, multi-faceted object to be discovered and explored”, with the ‘z’ in the name referring to the Trezor’s electric zero-emission powertrain. The teaser image shows a hexagonal theme, which is a move away from the “simple warm and sensuous lines” of the current design language that formed the basis of the DeZir.
The release of the DeZir concept was followed by a complete model line renewal between 2012 and the present day. Renault will continue to base its design philosophy on the ‘Life Flower’ diagram, which was introduced with the DeZir concept, and includes petals – labelled Love, Explore, Family, Work, Play and Wisdom – representing elements of the cycle of life. Renault’s design chief Laurens van den Acker uses these to form the basis of his design strategy. The Trezor concept will be showcased at Paris alongside the new Koleos, as well as a new lightweight pick-up truck called the Alaskan, which is based on the Nissan NP300 Navara. 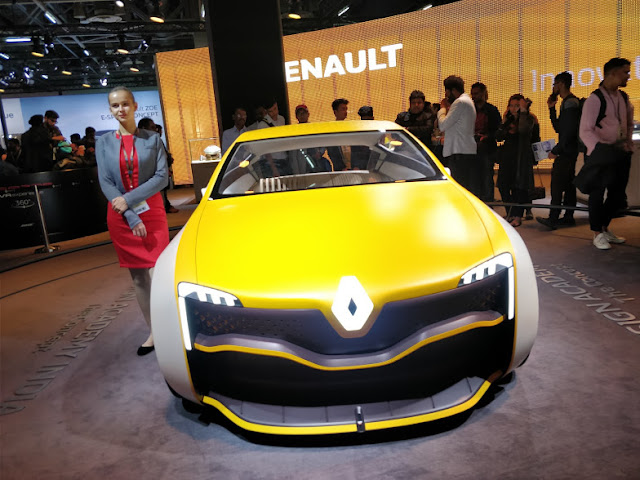 Essentially a more powerful iteration of the Zoe electric hatchback, the e-Sport is a technology demonstrator for the French carmaker at the ongoing biennial event. Drawing inspiration from Renault’s Formula E involvement, the Zoe e-Sport is powered by two electric motors that produce a combined 466hp and 640Nm of peak torque; its claimed 0- 100kph time is a rapid 3.2sec. Though there is no information on when this EV will launch in the Indian market, we had earlier reported that the Zoe hatchback has been spotted testing in Bengaluru. From this, we can infer that Renault is evaluating the EV for an India introduction. 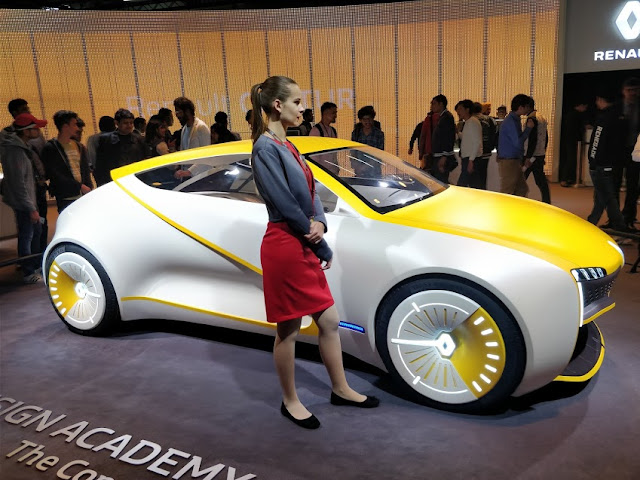 The standard Zoe is powered by a new 41kWh battery, up from the 22kWh unit that was used in the previous model. It has a driving range of up to 400km (under the European driving cycle) and takes 65min for an 80 percent charge via a quick charger. Renault claims a real-world driving range of 300km and a full-charge time of 8-9 hours using a standard 7kW charger. The ZOE e-Sport Concept is a fully electric concept made from lightweight carbon fiber, which helps to ensure outstanding acceleration from standstill to 100kph in just 3.2 seconds.
References
Spread the love