Judiciary is one of the three pillars of Indian democracy. The other two pillars are legislative and executive. Judiciary is also the final arbitrator of the Indian constitutional arrangement. It functions as the guardian of fundamental rights as well as conscience keeper of normative values that are allocated by the state. After the French revolution, the demand for a democratic form of government has increased substantially. Through freedom struggles, many states established democracy.

Today democratic countries like India adopt democracy with a written constitution and the welfare nature of the state. Montesquieu in his book ‘The Spirit of Laws, 1748’ postulated that concentration of power in one person or a group of persons results in tyranny. The role of the Judiciary becomes important in this aspect to protect democracy from tyranny and establish a rule of law. It keeps checking on arbitrary actions of the government of the day.

In the age of the 21st century, the role of the judiciary is not only limited to interpretation but it also works as a tool for good governance and promoting democracy. Judicial governance allows judges to adjudicate in favor of a progressive society through social engineering. For example, the Supreme Court of India adopted the polluter pays principle for environment conservation. It leads to sustainable development with the judicial use of natural resources.

Apart from the environment, it provides a system of checks and balances to the other organ of the government. For example, to bring objectivity, the supreme court of India laid conditions for the imposition of Governor Rule in states in the S.R. Bommai case. Some issues demand different perspectives and care which can’t be explicitly derived from the constitution. Judicial governance allows a judge to use his personal judgment in situations. For example, the Triple talaq case and Sabrimala judgment was an attempt to ensure equality and women’s empowerment.

During the COVID-19 pandemic, Delhi high court even issued a contempt notice to the Centre on the oxygen issue. The court worked at micro-management during the pandemic, fixing oxygen quota and distribution. Similarly, the Uttarakhand High Court pulled up the state government for allowing the Kumbh Mela to go ahead against scientific advice and not following standard operating procedures. According to a study, there is a direct correlation between the judiciary and economic growth. Thus, judicial governance becomes imperative in democracies.

In the words of Abraham Lincoln, democracy is a government “of the people, by the people, and for the people”. Functional democracy has traits of electing the government peacefully. People have the power to remove the government through a free and fair electoral system. Here, the judiciary plays an important role in ensuring free and fair elections in India. In this regard, the Supreme court takes the report of the Association for Democratic Reforms (ADR) report into consideration which claims that 43% of the elected MPs in the 2019 general election are from criminal backgrounds.

Consequently, the Supreme court ordered parties to publish the criminal history of their candidates for Assembly and Lok Sabha elections along with the reasons for fielding suspected criminals over decent people. In 2017, the Supreme court of India asked the central government to decriminalize politics by setting up special courts to exclusively try pending criminal cases against politicians in a timebound manner. Similarly, the Supreme court recognized negative voting as a constitutional right of a voter and directed the Government to provide the ‘NOTA’ option in electronic voting machines.

Apart from the criminalization of politics and the NOTA option, the rise of public protests from Shaheen Bagh to the anti-farm movement, declining quality of debates, increasing absentees, and low iteration rate i.e., only approx. 35% of the MPs are able to retain their seats in the general election 2019, according to the ADR report, shows the decline of parliament. Thus, Judiciary has taken the role of legislation through judicial activism by guiding the parliament.

For example, Vishakha guidelines were stipulated by the Supreme court regarding sexual harassment at the workplace. Later, parliament legalizes those guidelines through the Sexual Harassment of Women at Workplace (Prevention, Prohibition and Redressal) Act, 2013.’ Thus, it fills the void created by the legislature. However, the Supreme court derives its power from Article 143 of the Indian constitution to give ‘Complete Justice.’

Thomas Reid says that ‘A chain is as strong as its weakest link.’ It indicates the significance of the weaker section in society. In other words, the strength of a chain is limited to that of the weakest link in the chain. Protection of weaker sections like women, children, minorities, transgenders, and elderly people shows the maturity of democracy in a country. It’s the judiciary that protects the interests of the weaker section. For example, NALSA Judgement asks for social justice through affirmative actions for transgender people.

During the COVID-19 pandemic, the judiciary ordered to fix a “minimum” ex gratia of Rs 1 crore for every official who succumbed to the pandemic because of panchayat election duty. To protect the interest of poor people, Kerala high court ordered a ceiling on charges in private hospitals for Covid-19 treatment. In the Indira Sawhney case, the Supreme court upheld the social justice given to the OBC community through affirmative action. Similarly, in the Rohingya case, the Supreme court mandated that Rohingya shall not be deported until the procedure is followed.

Cog in the wheel of progress: Challenges

The role of the judiciary as Judicial governance is criticized as a violation of the separation of power under Article 50. Article 50 states that ‘The State shall take steps to separate the judiciary from the executive in the public services of the State.’ In Ram Jawaya case 1955, the court observed: “Our Constitution does not contemplate assumption, by one organ or part of the state, of functions that essentially belong to another.” It implies that there should be a broad separation of powers among the three organs of the government.

In the Deoki Nandan Aggarwal case 1991, the court stated that the courts do not have the power to legislate. The principle of judicial governance is against the principle of Judicial restraints. It encourages judges to limit the exercise of their own power. Even the appointment process of the Judiciary has an allegedly anti-democratic in spirit. Even Dr. Ambedkar was not in the favour of collegium system where a judge chooses a judge. There is a paradox when a group of unelected people is limiting the power of the government.

Apart from these, unlike the administrative authorities, the courts don’t have expertise in the field of administration. For example, the Supreme court ordered to ban the registration of BS-IV vehicles after April 2020. It lacks the proper assessment of the economic viability of this order which may hamper India’s growth. The courts also lack the machinery to deal with highly sensitive and technical issues. Excessive critical observation of the court demoralizes the honest and dutiful officials who are against inclusiveness in democracy. Unnecessary jumping into other’s domain waste court’s valuable time followed by an increase in pending cases.

This essay has been published in Chronicle Magazine – Link. 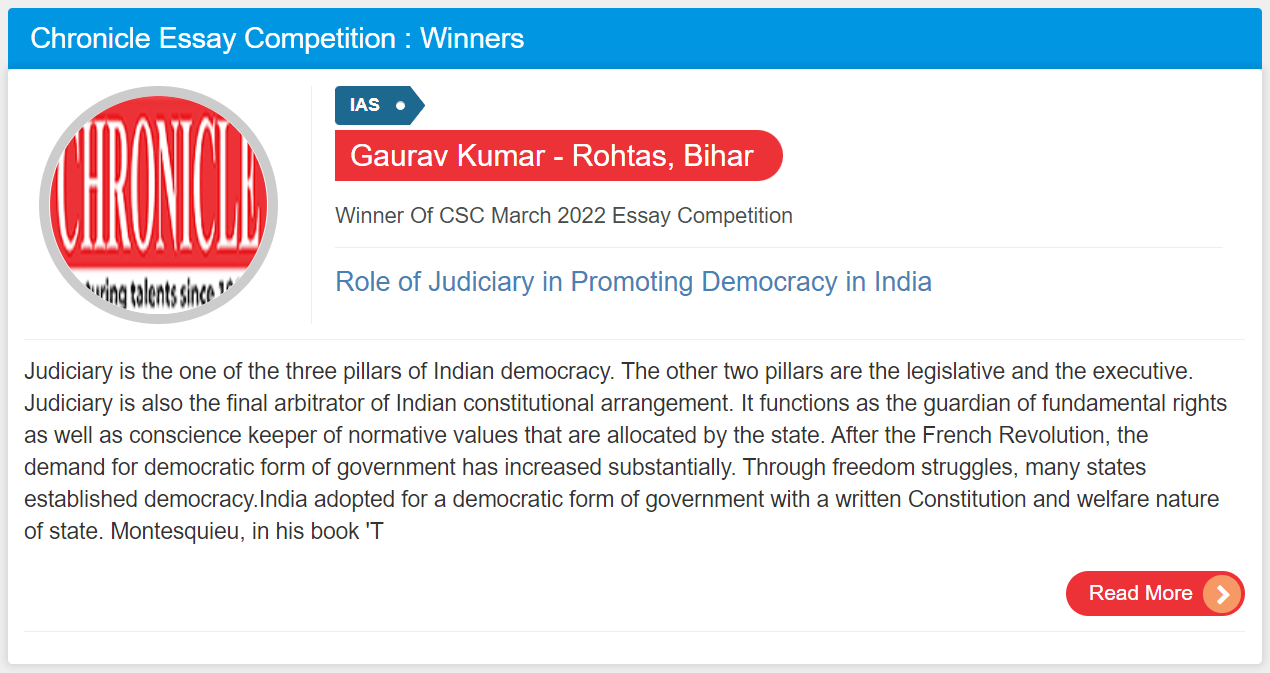