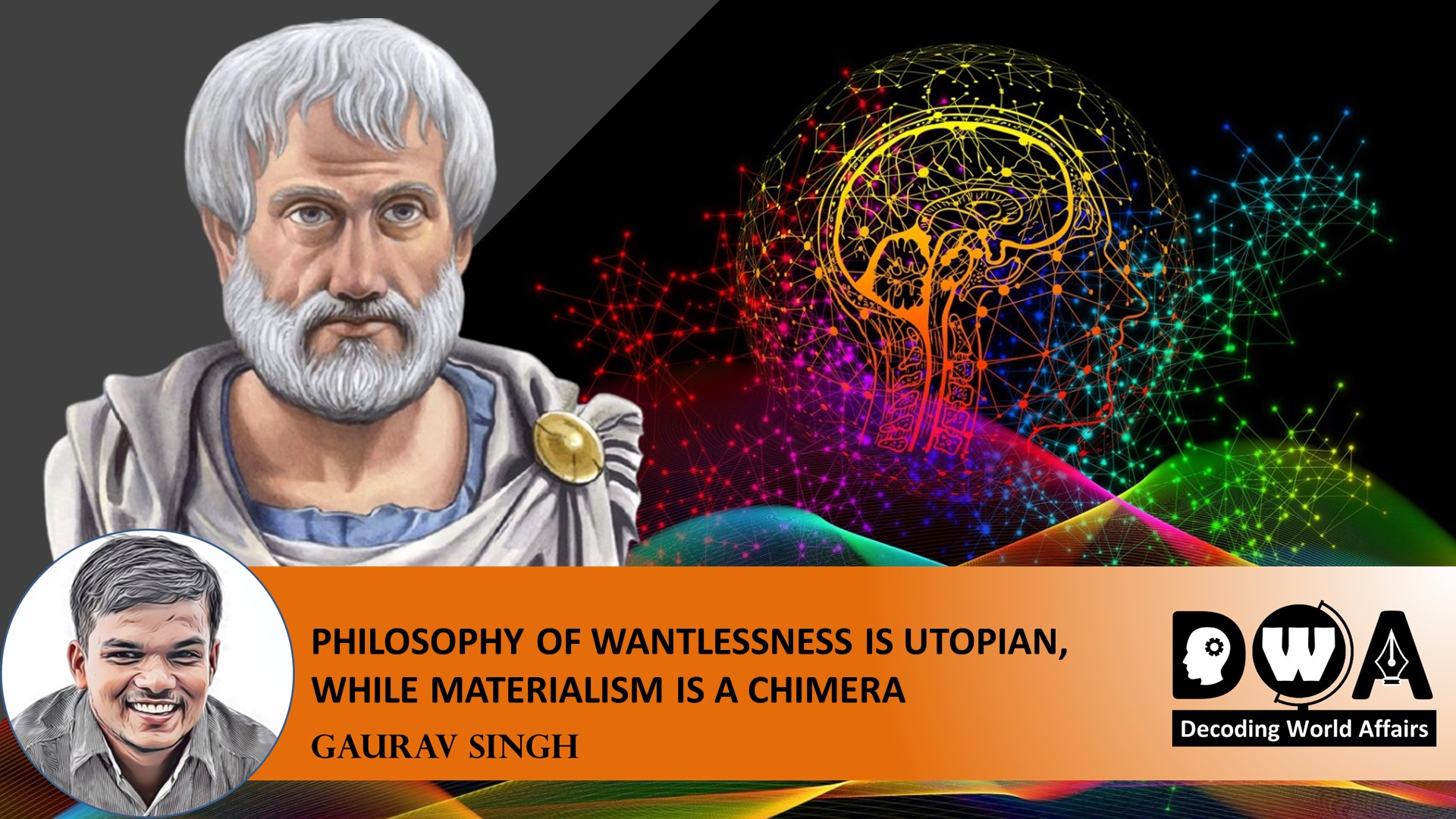 In ancient Greek, there were two classes of philosopher – Socrates group and Sophist group. Both of them carried diagonally opposite ideas. For example, in the context of property, Plato, a disciple of Socrates argued that private property should not exist and property should solely be controlled by the state. On the other hand, Sophists believed in private ownership of property. Subsequently, Aristotle, a disciple of Plato gave the conception of ‘golden mean’ (middle path) in the context of the property.

From Aristotle’s perspective, the excessive property is evil as well as also it is a source of happiness and motivation to an individual. It shows that Socrates’ idea of the abolition of private property is a utopian idea. Similarly, Sophists’ idea of excessive private property is a chimera in their conception. Thus, between two extremes, there would always be a middle path as suggested by Aristotle. Things in the world can’t be deemed in black and white since many shades of grey exist between them.

In this essay, we would be happy to discuss these two extreme conceptions of witlessness and excessive possession. We would also discuss the reasons behind these extremes. Shreds of evidence would be evaluated across the spectrum which substantiates the triangular relationship of the thesis, antithesis, and synthesis. We would look upon ways through which golden means could be adopted in human beings.

Existence of extremism: Wantlessness and Materialism

Wantlessness is an extreme state where a person gives up their wants. For example, Jainism in Indian philosophy best represents a situation of wantlessness specially the Digambar sect of Jainism. Materialism is a state which creates temptation in human beings to acquire wealth more and more for pleasure. Charvaka’s philosophy best represents the materialistic approach to the way of life. Charvaka rejects normative values like believing in karma and god.

In the philosophical sense, wantlessness is a utopia that believes in inner satisfaction followed by acquiring happiness. Similarly, materialism is a chimera that stresses upon acquiring pleasure. For example, a person working for needy people in society achieves happiness when he/she serves the people. But a materialistic person focuses on buying new vehicles and gadgets which bring ‘pleasure’ for him/her. Apart from these two, the third kind of people is also found which makes the balance between the two.

In the 19th century, capitalism was getting a great hold in the world’s economic system. Philosophers talked about a free economic system. Since the inception of the nation-state through the treaty of Westphalia, the legitimacy of capitalism as a thesis was increasing. Later in the 20th century, this system was highly criticized by Karl Marx. Marx proposed the idea of communism on the idea of ‘freedom from wants’. It was deemed as a utopian system that lacks realism.

Later, social liberalism became synthesis as explained by John Rawls in his theory of justice. It chose the middle path and reconcile both liberalism’s liberty as well as communism’s equality. On the one hand, Rawls talks about liberty but to contain inequality, he talked about equality of opportunity. Along with these, he also gave benefits to the weaker sections through the difference principle, affirmative action to those who could not access equality on their own.

Generally, religious philosophies believe excessively on duty and minimum rights. The Digambar sect of Jainism goes to an extreme level where it gives up clothes, milk, and some vegetables on the logic of non-violence. For example, milk and its associated products hold bacteria. Thus, it is prohibited to consume. Similarly, the Charvaka school believes in this world and rejects the notion of duty of any other world. Subsequently, Buddhism proposes the idea of the middle path which argues that both are necessary but in a balanced way.

Apart from religious philosophy, its image is also reflected in the governance system. Just after independence, it was believed that government will be the sole caretaker of the masses. At that point of time, it might be the best idea. But in today’s context, it seems utopian. The government came with LPG reforms in the 90s in which the role of the market became very important. However, this reform was criticized as ‘excessive materialism’ which would enhance ‘inequality’ further.

In the field of environment, as we know that plastic has become a matter of serious concern. Various strategies have been adopted in the world. Some countries have adopted utopian ideas to eliminate plastic. But the industrial society doesn’t want to give up since it works as complementary to goods in preservation, packaging, and selling. In this context, the plastic man of India, Rajagopalan Vasudevan chose the middle path. He suggests that the use of plastic can be minimized but can’t be stopped. Thus, there is a need to re-use plastic for making roads instead of leaving in the environment.

In international relations, liberalism, a leading ideology of the US is deemed as utopian by the realistic scholars of the USA. The logic behind the assertion is found in the pacifist notion of the US in the world. Offensive realism of the US talks about the other extreme end of the US foreign policy. According to it, power is to be meant as well ends. But the defensive realism of the US draws a line in between these two extreme ends where it says that power is merely mean and security is the end of a foreign policy.

Assessment of these two extremes

In the utopian world, no one would be benefitted. It would be merely reduced to an idea. But in the materialistic world, some people would be benefitted. Hedonism gives pleasure and not happiness. Excessive materialism makes people unidimensional. It means to acquire pleasure, people start focusing solely on economic activity. Subsequently, political activity and cultural activity take a back seat in this process. Thus, a blind race for achieving material gain would start and reduce man’s capabilities.

Extremism either witlessness or materialism would create obstruction in making the soul great. In the world of English philosopher, J.S. Mill, “A dissatisfied man is better than a pig satisfied.” Blind material satisfaction would also increase inequality and subsequently relative deprivation. Thus, it would not pass the envy test where everyone will be happy. However, making everyone happy is also a utopian notion. But happiness can be served to the maximum number of people by adopting the middle path.

Ways to the golden mean

The middle path as suggested by Aristotle as well as Buddha need to be incorporated to avoid both these extremities of wantlessness and materialism. It comes closer to Gandhi’s ideas of ‘Theory of Trusteeship’ where he deemed industrialists as trust and people as trustees. It means industrialists should keep the money as per their needs and the rest needs to be re-distributed in society. This philosophy of Gandhi Ji draws a middle path between industrialists and the people at large.

Apart from ancient Greek and Buddhist philosophy, Upanishads also talked about a balanced life and limited desire. It doesn’t talk about ‘end of desire’ and ‘live only in desire’. This middle path would help us in getting out from this dilemma that existed between witlessness and materialism. It is because detachment of desire is not an achievable goal while materialism is an endless chase. It could be inculcated through education and awareness programs. Meditation and yoga would also help in self-realization.

Similarly, one can’t live without a house and one should also not chase of the bigger house than a requirement. These two extremities exist to process history. When one extremist idea is posed as a thesis then another extremist idea comes before as antithesis to it. These two help in finding a middle path i.e., synthesis, a better way in the interests of society.